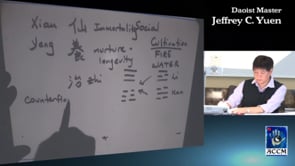 Within the context of Chinese medicine, understanding one’s ming-life or constitution and its associated yun-destiny or lesson plans affords an individual the ability to make conscious and notable decisions as to how to best live his/her life. In the same vein, an individual may also determine that the circumstances present in his/her current life are overwhelming and conclude with choices to make alterations to his/her constitution as a measure of bringing stability and perhaps even freedom from the prevalent difficulties in all aspects of his/her life, ranging from health, fortune, and relationship issues.

Since ming-life is the product of the union of jing-essence entailed from one’s parents and the shen-spirit bestowed from tian-cosmos, the process of changing one’s constitution involves the transmutation of jing-essence through the practice of dan-alchemy or the transcendence of the shen-spirit in the discipline of chan-meditation. Such practices evolved into revelations that developed into techniques that were utilized by early Daoist adepts, of which some of these realizations were incorporated into Chinese medicine.

In alchemy in Chinese medicine, the concentration was devoted to the transmutation of jing-essence by impacting its mechanism of dissemination, transformation, and fulfillment as decreed by the individual xing-nature/temperament. Recognizing the “density” attributed to jing-essence, alchemists focused on how to generate “reactions” that would distill, refine, and reconstitute its “state” through the dynamics of controlling the fire and maintaining the level of dissolution via water – as portrayed through the use of moxabustion and hydration prior to, during, and after treatment. In addition, recognizing the correspondence between jing-essence and the “solid” nature of stones, alchemists experimented with different rocks and alloys that would render potent changes in the environment, eventually settling upon the use of jin-gold, yin-silver, and tong-copper. The use of such ores would be integrated into acupuncture, by which their “illuminations” would guide the guang-light of the shen-spirit to modify or reform its cosmic mandate within the individual.

From a clinical perspective, the role of alchemy in acupuncture is to provide the patient with a constitutional approach toward either an acceptance of his/her life or the possibility of making adjustments to fine-tune his/her existence. Based on the premise that alchemy involves the redemption of shen-spirit from jing-matter, the ramification of its practice can be far-reaching by which the individual comes to understand the driving forces behind his/her life and the motivations that intrinsically unfold as one fulfills his/her purpose, whereby health itself is but a lesson plan along the way.

Alchemical Acupuncture and Alchemy in Chinese Medicine can be used in the treatment of congenital diseases, acquired challenges to the constitution/immunity, including auto-immunity, and conditions affecting the elderly population.