Acupuncture is one of the oldest forms of healing known to mankind. It is part of the traditional medicine of China, which also includes herbal medicine, exercise, massage and nutrition. Acupuncture developed through extensive observation and clinical testing over the last 4000 years as a system of medical theory and practice, which is different from, but no less valid than, Western medicine. It has its own consistent theoretical concepts, philosophy of health and disease, theory of disease aetiology, system of disease classification and coherent diagnostic and treatment framework.

However, acupuncture was not widely introduced as a treatment modality in the West until the scientific basis of acupuncture began to be explored in the middle 1970’s. (1-6)Over the past thirty years acupuncture has increased popularity in modern healthcare and has increasing support among scientific investigators (7-9)

Of the many clinical uses of acupuncture, acupuncture analgesia was one of the earliest to be investigated. Animal and clinical studies suggested that the analgesic efficacy of acupuncture might be achieved by its ability to stimulate pain modulation systems to release neurotransmitters such as endogenous opioids. Several structures of the descending antinociceptive system including the hypothalamus, the nucleus accumbens, the mesencephalon (including the periaqueductal gray matter and raphe nuclei) and the dorsal horn of the spinal cord were shown to be involved in the analgesic mechanism of acupuncture. More recent studies suggest that several areas of the limbic system may be as important as the descending antinociceptive pathway for the central nervous system mechanism of acupuncture analgesia (1,2,11-19).

However, investigation of the neuronal correlates of acupuncture in the human brain was limited by the lack of non-invasive methods such as functional magnetic resonance imaging (fMRI) and positron emission tomography (PET).  Recent studies using these new functional brain imaging techniques have revealed the existence of specific acupoint-brain correlations, for example acupuncture points traditionally implicated for auditory, visual, sensory, motor and cognitive functions were shown to modulate the activity of the corresponding cerebral sites.

Dr Zang-He-Cho of the University of California, Irvine, a researcher in neuroscience and brain imaging was one of the first researchers to use fMRI for the quantitative study of the correlation between different acupuncture points and distinct functional areas of the brain. His aim was to establish a clear correlation between acupuncture points and organ imbalances or diseases. He set out to test the ancient acupuncture assertion that stimulating a point on the little toe improves vision.

The acupoint Bladder 67 (Zhiyin) is located on the lateral side of the little toe posterior to the corner of the nail. (see image below) 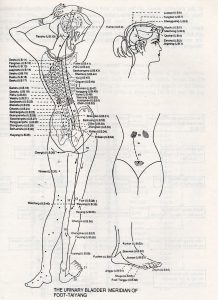 The plantar digital proprial nerve and the lateral dorsal cutaneous nerve of the foot innervate this point. Although there is no direct neural connection between the little toe and the eye this acupoint is traditionally indicated for eye conditions. Cho et al (1998) demonstrated that when this point is stimulated, activation of the visual cortex in the occipital lobes, similar to actual visual stimuli, is seen on fMRI.  An experimental control was obtained by stimulating a nonacupoint location 2-5cm from BL-67, resulting in no fMRI response in the occipital lobes. (see image below) 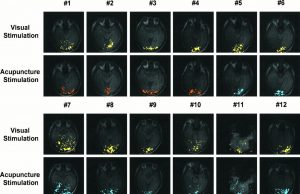 In TCM, morphopsychological types can be divided into two main categories – Yin and Yang. These two types are identified by physical appearance, preference for cold or hot settings and for certain foods and by pulse and tongue diagnosis. Acupuncture texts claim that stimulation of certain acupoints can have exactly the opposite effects with different patients depending on whether they are Yin or Yang characters. Cho expanded his research to test this theory by stimulating Bladder 67 on both Yin and Yang subjects. To his great surprise he found that Yin subjects all had the same response when this point was stimulated – activation of the visual cortex and return to normal when the stimulation stopped. The Yang subjects showed the opposite effect. In Yang subjects’ stimulation of this acupoint deactivated the visual cortex, and when stimulation stopped, the visual cortex returned to normal. (see image below)

There is no equivalent in modern physiology to Yin/Yang theory. Nevertheless this ancient theory is able to predict that the brain would respond in exactly opposite ways to the same stimulation with the same needle at the same acupoint. This fMRI confirmation is so astonishing that most doctors reading this will probable chose to disregard or ignore it.

More recently, Litscher et al (2004) from the Medical University of Graz, Austria, developed a new laser needle acupuncture method that enabled them to stimulate multiple vision-associated acupoints at the same time. The advantage of this optical stimulation is that it is absolutely painless and has no tactile stimulation and therefore cannot be felt by the patient. It also facilitated the simultaneous stimulation of eight or more acupoints.  Litscher using fTCD (functional multidirectional transcranial Doppler sonography) in a randomized controlled double-blind cross-over study design found that stimulation of vision related acupoints resulted in an increase of mean blood flow velocity in the posterior cerebral artery and significant changes in activation of the occipital and frontal gyrus were demonstrated by fMRI.

The above laser acupuncture studies concluded that the brain activity found is not due to peripheral afferent input from the dermal mechanoreceptors or upon afferent sensory information processing. The results are in agreement with other studies using traditional needle acupuncture that show the involvement of a corresponding brain area with a specific acupoint.

Research by Napadow et al (2004) found that all acupuncture stimulation (manual and electro-acupuncture) produced more widespread fMRI responses than did placebo-like tactile control stimulation. Acupoint ST-36 was selected for use in this particular study. This point is located on the anteriolateral side of the leg about one finger breath from the anterior crest of the tibia. It is   indicated in the treatment of abdominal pain and distension, constipation, diarrhoea, vomiting, gastritis, duodenal ulcer, gastroptosis, indigestion, jaundice, insomnia, polyneuropathy of the lower limb and knee pain. Acupuncture at acupoint ST-36 produced signal increase in the anterior insula, and decrease in limbic and paralimbic structures including the amygdala, anterior hippocampus, and the cortices of the subgenual and retrosplenial cingulate, ventromedial prefrontal cortex, frontal, and temporal poles, results not seen for tactile control stimulation. (23)

Several other studies have documented the ability of acupoints implicated for specific functions modulate the activity of corresponding cerebral sites. Activation of the visual cortex was observed on fMRI during the stimulation of vision-implicated acupoints BL67, Bl-66, BL-65 or BL-60. The right homologous areas of typical language sites were activated during stimulation of a language-implicated acupoint SJ-8 or DU-15, but not adjacent nonacupoints. (25) Activation of acupoints on the leg or arm implicated in the treatment of limb weakness, but not adjacent nonacupoints, produced activations on fMRI over the somatotopic sensory cortices with co-activation of the motor cortices. (26)

In addition to acupunctures modulation of the central nervous system including cerebral, limbic and subcortical structures Yoo et al (2004) from the Harvard Medical School, Boston, USA, found that anatomically specific areas in human cerebellum are also modulated by acupuncture stimulation beyond classical involvement of cerebellum in motor coordination. Functional MRI was used to investigate neural substrates responding to the acupuncture stimulation of acupoint PC6 (Neiguan). This point, located between the tendons of the m.palmasis longus and flexor carpi radialis, is traditionally used in TCM for the management of various types of nausea including vestibular-related motion sickness. Acupuncture stimulation of this point, in comparison to sham acupuncture and tactile stimulation conditions, selectively activated left superior frontal gyrus, anterior cingulate gyrus and dorsomedial nucleus of the thalamus. Acupuncture-specific neural substrates in cerebellum were also evident in the declive, nodulus and uvala of vermis, quadrangular lobule, cerebellar tonsil, and superior semilunar lobule. This research suggested that the clinical efficacy of acupuncture point PC-6 in the treatment of various types of nausea might be mediated by the cerebellar vestibular neuromatrix. (24)

Evidence from studies using modern functional neuro-imaging suggest gives that needle and laser acupuncture can activate specific structures in the human brain and lead to a modulation of their neuronal network. They also prove that acupuncture can stimulate aspects of the CNS without direct neuronal connection. This in turn implies that the nervous system is far more complex than we know and that acupuncture works via some computer-like code interpreted by the brain. 27

It would mean that the map of the body described by acupuncture’s system of meridians is accurate in terms of the correspondences it suggests – that, for example, the point Bl-67 on the little toe, traditionally used for eye conditions, is on a acupuncture meridian connected to the eye, suggesting to us that although there may be no neuronal connection between the little toe and the eye, there is a relationship that the central nervous system can understand and act upon.