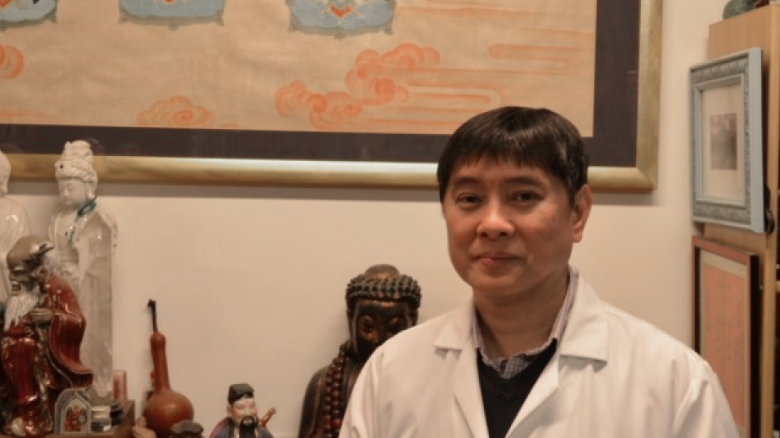 Could you begin by giving us the background to this class, and why you decided to teach it?

“I have to say that it was not something I had intended to do. What I was planning to do this past year was to teach one of my normal one-year programme classes on healing with stones and things like that.  The previous year we did a one-year programme on classical Chinese herbal medicine, and I touched on shamanism and herbal medicine.  A lot of the students were really thrilled with that segment of the class and wanted me to continue teaching it – but I was somewhat ambivalent because I didn’t know how seriously people would be taking it.

“If you’re going to teach a class like this, you’re going to do exercises with the students, and a lot of those exercises really involve altering one’s state of consciousness. And there are a lot of ramifications when you change the reality of how you’re seeing the world, and yourself.  Without proper grounding you can get into a lot of trouble. So I thought, well, maybe I’ll do that in the future.  And I was set on teaching a class on healing with stones. But in a dream, it was told to me that I should teach this particular class.”

When you say a dream, Jeffrey, do you mean literally a dream?

“Yes, in a dream an older gentleman came and told me I should teach this class. And so I made the decision.”

Can you explain what you mean by shamanism?

“Shamanism, in my opinion, is the root of both religion and medicine.  It’s inseparable. Both religion and medicine are supposed to offer some sense of salvation, or redemption – be it of the physical body, be it of the soul. If we look at the historical figures within Daoism and early Chinese medicine, a lot of these were shamans. Many are depicted wearing what we would consider a shamanistic outfit. They might be wearing feathers around their bodies.  They might be wearing a mask – which would symbolise the idea that they’re becoming someone different.

“In Daoism the early connections were always with nature. These early shamans took time to be in silence, in stillness, which awoke them to another level of reality.  At 20 years of age the founder of my Daoist tradition – her name is Lady Wei – would go into the woods and collect plants. Not because she was being a naturalist, but because she was being at one with the plants. And the plants that she collected became the path to healing for her.

“When you get to that level of serenity, the plant spirits – or what they call ‘plant songs’ – create an intimate connection with the person. It’s almost like the plant functions based on its interaction with the healer, rather than on a more objective list of classifications where you say, ‘Well, this is what that plant does’. Once you become intimate with the plant it’s almost like the spirit of the plant talks to you – and it then becomes part of who you are.  So that plant works for you because it’s being activated, or invoked, by who you are.”

So shamanism always involves connection with the spirit world, in one form or another?

“I would say there are many levels by which one might practice shamanism.  People work at the level they’re most comfortable with, or the level that their own cultivation has evolved into. There are a bunch of students in my class in New York who who already consider themselves to be shamans.  They’ve undergone training in the Amazon, in Peru; there’s one person who’s an African shaman and there are a number of Native American shamans.

“In the Daoist tradition which I belong to, the Shang Qing school, we do a lot of meditation.  In the course of that meditation we enter into what I guess, in the West, you would call ‘an altered state of consciousness’. We call it ‘entering into another reality’.  And in that reality you  get to learn from those things that you make contact with. You basically allow your consciousness to go into different realms, and at the same time you become another consciousness. You don’t try to control anything, you try to be open to everything. There’s a sense in which you lose who you are when you’re in that meditative state – and then you return back to how you basically believe you ‘are’. It’s almost like schizophrenia.”

Which is why you have to be so well grounded in your own reality to begin with?

“Right. So you can see why I was ambivalent about wanting to teach something like that to a group of students – a lot of whom I don’t know individually.  At the beginning we did a lot of grounding exercises, and I tried to emphasise that when you go into one of these states there’s a lot of things you need to do to return to physical reality-  such as put your attention to parts of your body. So your body becomes like a grounding tool which helps you to stay anchored.”

For you, Jeffrey, is the shamanistic approach an important tool in a healer’s repertoire?

“I think it’s probably the most important tool. About six years ago I went into semi-retirement. I didn’t want to practice Chinese medicine for a period of time, and it was because I wanted to take time to contemplate the essence of healing.   To me, that was not what I was practising. There was something I believed was still missing, in terms of working with individuals to seek healing based on the individual, rather than just giving herbs or giving acupuncture or other healing modalities.  A lot of it was really asking, what is the underlying spirit of healing?  And taking time to contemplate and reflect on that.  And I can’t say I’ve found  the answer!  But I have definitely come to a greater realisation of what it is that I believe needs to occur in the process of healing –  and that is, that the consciousness that brings on disease cannot be the consciousness that brings on healing.”

This is something you’ve spoken about before, Jeffrey: could you sum up why you feel it’s so important?

“I believe that to heal a person has to shift their consciousness.

In Western medicine there’s this  sense of objectivity – of not allowing the transference of the patient into the clinician, and vice versa. But I believe that’s not appropriate. I believe that I have to be in the consciousness of my patient so that I can alter that consciousness, and then bring that consciousness back to the patient to see if they can alter it. So it was really for me to become more aware of how my patients were seeing themselves – almost like a form of therapy. I had to take ownership of their consciousness, to see how they would think in various circumstances. And maybe give them different ways of looking at it, or seeing it, in order to provoke them to change their perception.”

As you’ve said, however, entering into an altered state of consciousness can be dangerous – if it’s done without sufficient preparation and grounding. What are the potential dangers of a shamanistic approach, and can you give some examples of the grounding exercises you used with your students?

“Well, the dangers might involve you summoning up or generating images  – or, for lack of a better word, entities – that potentially can be harmful to yourself.  If you start meditation and you believe in, say, ghosts, then you may enter a dimension where there are ghosts. Because if I say ‘I’m afraid of ghosts’, the hair on the back of my neck starts to rise, and the fear can build into a state of panic. That state of panic is going to sabotage your ability to go further.

“That’s why one of the early lectures that we had on the shamanism course was all about how not to be afraid of death and dying. The most that anything can do to you is to cause you to die – and if you’re not afraid of death and dying, then you’ve overcome one obstacle to shamanism already. That’s why, in some religious traditions, people sometimes meditate in cemeteries or get buried underneath the ground. They’re doing things to stimulate fear. The ultimate fear is the fear of annihilation – that you’ll no longer be who you are. So if you can overcome that fear in a mental, emotional and ultimately physical way, that’s one of the grounding techniques.

“One of the things the students had to do was learn to be comfortable in total darkness. When I was young, I grew up in  New York city – so my meditation room was the closet. I would be locked up in the closet, and it would be totally dark! Some people would find that really uncomfortable.  But the idea is that in total darkness you can generate light. The Daoist master Chuang Tzu writes that with day comes night, with life comes death. Night returns to day and death returns to life. The idea is to provide a beacon of light, to provide guidance to those who are stuck in that state of consciousness.  Because if a healer is stuck there, then they can’t really offer their patient much resolution – outside the comfort of compassion. That’s very important. But it may not just be enough for healing to take place.”

To sum up, then, a shamanistic approach to healing is not really about externals – feathers, masks and so on – but has more to do with internal change?

“The ultimate thing to realise is that there are no tools in shamanism.  Although people use feathers, or they use chanting, or drumming,  those are just crutches – just as in healing we use herbs and needles and all of that. But the healing comes from within. What we do is, basically, we are touching the person with our spirit. Anyone who is a healer in the truest sense just heals with their presence. We can feel that energy, and if we’re receptive to it it opens us up to the endless wonder of human possibility.”

Empowering the Self to Confront Illness

It’s always good to talk to Master Yuen — who always has something interesting, challenging and often — literally — life-changing to say.  This year, his weekend workshop on Chinese Medical Aromatherapy at the Royal Marine Hotel in Dun Laoghaire — plus his public lecture on the topic of “Empowering the Self to Confront Illness” — promises to be fascinating from start to finish.